A guest post written by Patrick McNichol (used with permission)

88,000. That’s equivalent to twenty-nine 9/11 terrorist attacks. It’s about one person in the Buffalo Metro every day.

This is how many people die as a result of Alcohol Use Disorder (AUD) in the US each year, according to the National Institute of Alcoholism and Alcohol Abuse (NIAAA).

Could a revolutionary treatment for alcohol addiction called The Sinclair Method (TSM) save the life of someone that you know?

Three people I know have died from alcohol addiction and I know others who struggle from this progressive disease. During my journey researching this illness, I’ve discovered that TSM has shown to be highly effective and has helped tens of thousands of people worldwide.

The standard method for alcohol addiction for decades has been abstinence and has been a failure for the vast majority of patients. 90% of alcoholics will relapse within four years of abstinence treatment, according to the NIAAA. In contrast, advocates claim nearly 80% of patients using TSM either stop drinking or drink within safe limits. This represents a monumental improvement.

TSM is fundamentally different than other treatments because it reverses the biological cause of the addiction. The cornerstone of TSM is it requires the patient to drink. Yes, you read that right. More on that later.

The chains of addiction are incredibly painful. In addition to the physical toll, such as liver disease and cancer, people suffering from AUD go through hell. Addicts routinely battle cravings, anxiety, and depression. They suffer from turmoil created in their families and relationships. Addicts sometimes face financial problems stemming from job losses and run into legal trouble.

Yet, as punishing as it is, only a small fraction of those who need treatment seek it. It’s not only denial that keeps addicts away from treatment. It’s the treatment itself.

Standard treatment includes accepting the social stigma of being an addict (“I’m Sam and I’m an alcoholic”) and an incredibly difficult and potentially deadly detox. It can also include detainment in an expensive inpatient rehab center. Addicts are sometimes given the drug Antabuse that causes the patient to become violently ill if they consume alcohol. It’s a punishing process.

People with any other illness are treated with compassion but not those suffering from AUD. Instead, our culture casts shame and embarrassment on them. TSM recognizes that punishment is not the answer.

“It’s remarkable that people believe what’s needed is more punishment,” according to Dr. Keith Humphreys, Senior Advisor on Alcohol and Drug Policy to former President Barack Obama. “If punishment worked, nobody would be addicted. It’s a punishing enough experience.”

Alcohol addiction is not a matter of choice and strength of character. Scientists have found there’s much more to addiction than personal virtue.

Endorphins are the brain’s natural morphine. They’re released during the consumption of alcohol and are absorbed by receptors located on certain neurons in the brain. Once absorbed, the brain is rewarded and new connections between these neurons form. For some, repetitive drinking over years reinforces and strengthens these normally weak connections into “superhighways” causing intense cravings. When this happens, the brain becomes hardwired to drink.

Dr. David Sinclair, the late American researcher, dedicated his life to alcohol addiction. While working at the world’s foremost facility on alcohol research at the National Institute on Health and Welfare in Helsinki, Finland, he found that an inexpensive opiate blocker, such as naltrexone, binds to these receptors and keeps endorphins from being absorbed thus stopping the brain’s reinforcement process.

Dr. Sinclair found the addictive wiring can be reversed using the same behavior that caused it—repetitive drinking. Under TSM, the individual must take naltrexone an hour before drinking, giving time for the medication to fill in those receptors. When the individual then consumes alcohol, the endorphins bounce off the receptors and aren’t absorbed. The brain will receive no reward. 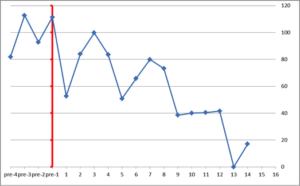 The more people drink while on naltrexone, the less they will want to drink. Each time the individual takes naltrexone and then drinks, it’s like he/she is using a jackhammer to break up a small part of those superhighways. Over a course of 4-8 months, the superhighway wiring is slowly removed, addictive behavior is extinguished, and the brain is returned to normal. This all can be done in private, without the public stigma or thousands of dollars.

There’s a debate amongst addiction specialists on how to measure success. What yardstick do we use? Is it complete abstinence or giving back control to the individual?

“It’s not been well studied, but naltrexone alone for AUD is not very effective at helping achieve abstinence,” said Dr. Torin Finver, Medical Director at Horizon Health Services of Buffalo. He favors traditional treatment. “There’s a reason we push for abstinence—it’s the gold standard.”

“Standards change,” said Jenny Williamson, Executive Director of the C Three Foundation, a non-profit organization that promotes TSM. “It’s been the gold standard by default because for so long there were no other options. It’s absurd to exclusively use a 300 year old belief system to treat a medical problem in the 21st century.”

If only 1 in 10 people suffering from AUD seek treatment and out of those, only 1 in 10 get better, then essentially the “gold standard” has a 1% success rate. “Where else would that stand in any type of medicine or approach in life? It just doesn’t make any sense,” said Dr. Yasinski.

In terms of studies, advocates point to nearly 100 published clinical trials of naltrexone showing that it’s both safe and effective for treating AUD, with few side effects. Naltrexone was approved by the FDA for AUD in 1994. The American Medical Association in 2006 advised that naltrexone should be widely used in general medical settings after it published the results of the largest clinical trial in the history of addiction research, Project COMBINE. It has proven to be a safe, well tolerated, non-addictive drug.

Changing how we deal with AUD will be challenging. The de-addiction culture is married to the dogma that there’s only one treatment for addiction—abstinence—through punishment, prayer, and “white knuckling it”.

Traditional treatments, such as the 12 step program, have an extremely high failure rate. “The 12 steps have zero foundation in anything scientific and yet every other element of the way we practice medicine is based on empirical data,” said Dr. Yasinski.

He disagrees that abstinence should be the first method of treatment. “The research we have shows that abstinence is highly unsuccessful. It’s one of the few areas in medicine that we don’t drive our treatment based on the evidence. It’s a very primitive, unevolved treatment approach.”

Indeed, we used to regularly treat those who suffered from mental illness with lobotomies at the old Buffalo Insane Asylum. We don’t do that anymore.

Claudia Christian, an award winning actress whose career has ranged over 30 years in film and television, has made it a personal mission to promote awareness of TSM. Founder of the C Three Foundation, she’s also written a book on her alcohol addiction and has a Tedx Talk that has nearly 450,000 views on YouTube. “The Sinclair Method saved my life,” she said.

Christian’s time in rehab was futile. “I’ll tell you first hand what happens at rehab. I’d wake up and drink juice, then have a session with a counselor. Afterwards I’d learn Tai Chi and stare out at the ocean. How does any of this address the biological cause of addiction?”

“Abstinence is like telling a diabetic they can never touch sugar again for the rest of their life. How realistic is that?” said Christian, who has also produced the TSM documentary, “One Little Pill.” “Many diabetics use insulin so that they can enjoy the occasional piece of birthday cake and feel ‘normal’ again. TSM gives back control to the individual and doesn’t socially isolate them for the rest of their life.”

One of the hallmarks of AUD is the loss of control over drinking. Christian explained, “Whereas before I needed to drink, now I can choose to have a glass of wine with a meal as long as I’ve taken naltrexone an hour beforehand.”

Even with the dismal track record, a lucky few respond well to rehab or other established methods. “We’re not dismissing traditional treatments at all,” Christian said. “In fact, combining TSM with them may have benefits. The more options, the better. Dr. Sinclair believed there was a huge unexplored territory combining AA with TSM.”

For example, Dr. Yasinski uses TSM combined with behavioral therapy in his practice and has had excellent results. “Our moderation program is designed to find the absolute minimum amount of work needed to still achieve a very high success rate.” Through Yasinski’s experience he’s found that having patients come in bi-weekly for three months combined with TSM achieves success rates of 75-80%. “The program is made so that it’s desirable to bring in those who need the help and for those who are coming in to stick with it because it’s not too cumbersome.”

Why haven’t I heard of this?

I reached out to a few professionals in the addiction field in Buffalo and they had either not heard of TSM or were only vaguely familiar with it.

There are several factors why TSM hasn’t made it mainstream—yet. One reason is that naltrexone is off-patent so any drug manufacturer can make it in generic form. There’s no financial reason for Big Pharma to market a drug that can be made dirt cheap by any competitor. You won’t see naltrexone ads replacing Cialis commercials during the Super Bowl anytime soon.

Another reason is that according to Forbes, the rehab industry is a $35 billion market. It typically costs $30,000 for a month of inpatient treatment. Frankly, if rehab clinics began prescribing TSM it would put many out of business. “If you make people better, you don’t have the revolving door of treatment,” said Christian.

Dr. Finver said TSM may help some but is unconvinced controlled drinking can work. “I believe it may help those who have mild to moderate AUD but not heavy drinkers.”

“Well that just shows how people don’t understand how TSM works because it’s completely irrelevant how much someone is drinking,” said Dr. Yasinski. “It’s not like the heavy drinker’s brain is any different. It’s equally effective for any type of drinker.”

Had TSM been more widely known, the three people I knew might still be alive today to share their recovery stories, just like Claudia Christian. Spread the word. Save a life.